Updated February 2, 2016: Check out my detailed review of Persil ProClean 2in1 liquid on Olga’s Laundry Blog. There’s also a giveaway running through February 16, 2016!

As you probably already know, I am a huge fan of German Persil and got very excited last week when the launch of Persil ProClean was announced in the US. Unfortunately, none of my local Walmarts were carrying the Persil ProClean line yet, so I reached out the the folks at ProClean and they were kind enough to send me some samples. I received them yesterday and of course had to put the US version of Persil to the test straight away! Here are my first impressions, and I will be doing a full comprehensive review after I’ve used the detergents for a while.

I have to start out by saying that I did not go easy on Persil ProClean. The German version is an outstanding detergent, so the bar was set very high. In fact, I actually put the ProClean through even more than I would regularly subject German Persil to just to see how it would do.

I started out by asking my husband to wear two identical white dress shirts a couple of days longer than he normally would, and fortunately he agreed. The result? Gross, set in collar and cuff grime, yellow perspiration stains and varietal coffe/ink stains on the shirts. Here’s a “before” picture so you know I’m not exaggerating: 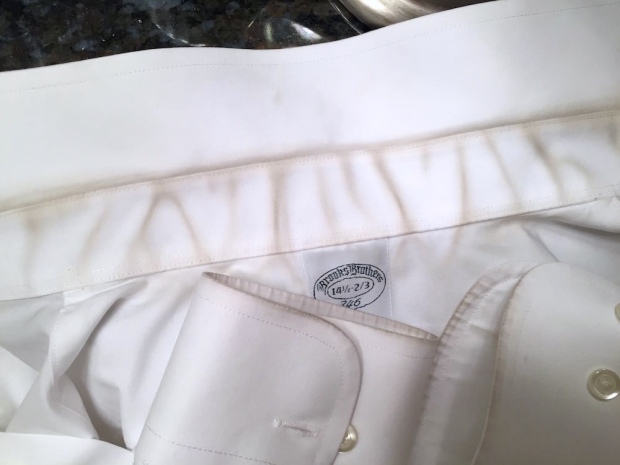 Gross! Quite a test for Persil ProClean

Now, normally I would do the following with a shirt this dirty: first wet the cuffs and collar with warm water and pretreat with Ecover stain remover, using the brush to really get the product into the stains, then set aside for 30 minutes. After that do a prewash (Miele calls this “Heavy Soil”) with Biz and use the Extra White/Hot (60C/140F) settings on my Miele W3038 with 3 Tbsp of Persil Universal Megaperls and an added 1 Tbsp of sodium percarbonate. The Extra White setting is great for stain removal, since it’s quite long and the clothes are tumbled fairly aggressively, and along with Custom it’s one of my favorites for heavily soiled/stained clothes.

But I wanted to really push the Persil ProClean, so I did not give it nearly as much help as I normally would my regular detergent. I chose to use only Persil ProClean products (so no other additives), and decided to experiment even further by pretreating the collar and cuffs of one shirt with some ProClean Original liquid, and washing the other without pretreating. I did not use warm water or a brush, just applied the liquid to dry fabric, pushed it in with my finger and let it sit for about 5 minutes.

One shirt got pretreated with some Persil ProClean liquid, the other didn’t. I buttoned the gauntlet buttons of the untreated one to tell them apart.

I then chose to use about 2 Tbsp of the Persil ProClean Original liquid as a prewash (“Heavy Soil”) and 3 Tbsp of the Power Pearls for the main wash.

I used about as much product as I would with German Persil.

I then decided to use the Wrinkle Free setting – it is a shorter cycle with less aggressive tumbling than the Extra White that I would normally use, and set it to Very Warm (50C/122F), since that is the hottest most standard US washing machines will go. I also added an extra rinse, since that is my standard MO. 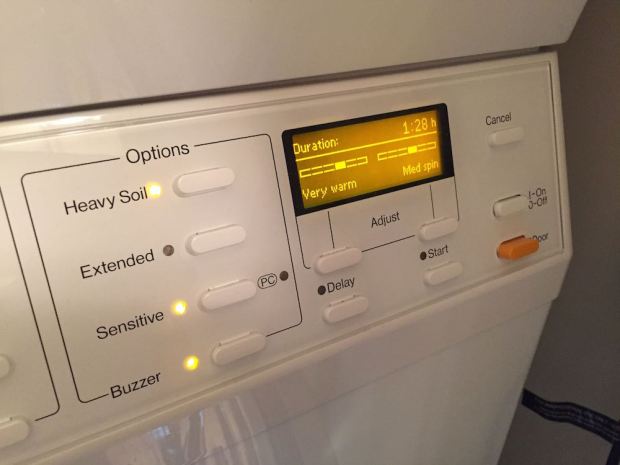 Note to self: the liquid is fairly thick, so next time I won’t use the liquid dispenser insert – it didn’t wash out of it well. However, in spite of that the overall results were pretty amazing!

The top dress shirt was pretreated with Persil ProClean liquid, and the bottom was not

The pretreating made a huge difference in the collars – the shirt that I had poured some Persil ProClean Original Liquid on before the wash came out virtually spotless. The dress shirt that I washed as is had some very faint stains left over.

Collars compared after washing with Persil ProClean: the top collar was briefly pretreated with ProClean liquid, the bottom was washed as is

However the cuffs came out spotless on both shirts, so next time I won’t bother pretreating those.

The top cuff was pretreated with ProClean liquid, the bottom was washed as is

Overall, I am VERY impressed with the new Persil ProClean line! I will be posting a more thorough review once I’ve used it for a couple of weeks, however I already know that it’s a great detergent that can finally provide some real competition for Tide. The price points for the two detergents are similar: you can get a small, 20 load bottle of liquid for around $5, a 50 load bottle for around $10 and a large 96 load pump bottle for $18; Persil ProClean used to be sold only at Walmart, but can now be found at many retailers in the US and on Amazon.

Once again, here is what I started out with…

…and here are the results of washing with Persil ProClean!

And now some notes for German Persil lovers on how Persil ProClean compares (you’ve probably already read my Persil vs Tide blog post): the scent is similar but not identical, and stronger than of the German detergent (and it airs out well, unlike Tide). All Persil ProClean formulas contain optical brighteners and the Power Pearls contain sodium percarbonate and TAED. The Pearls contain zeolytes. The formulas of the DE and US versions are not identical – fortunately the ProClean folks list the ingredients on the website so you can compare. It’s also a little more prone to sudsing, probably to accommodate the US top loader consumer who is used to seeing more froth during the wash. The Pearls come in a plastic bottle which I find very convenient (you can take out the pouring spout), however the measuring lines on the lid are impossible to read, so I measured the recommended amounts, and they indicate 3 Tbsp for a regular load and 5 Tbsp for a large/heavy load for both the Pearls and liquid – this corresponds to about how much German Persil I was using per load.

Have you already tried the new Persil ProClean line? Do you plan on trying it out? I’d love to hear your thoughts!

PS – Check out this blog post that announces the launch of Persil ProClean in Canada.

The Persil brand kindly provided me with samples of Persil ProClean laundry detergent, however all opinions expressed are my own.

My name is Olga and I'm a laundry nerd, proud Corgi owner, food and wine lover and Champagne-taste-on-a-beer-budget-ista. I am now blogging at Olga's Laundry Blog - join me over there!

https://cranraspberryblog.wordpress.com/ is a participant in the Amazon Services LLC Associates Program, an affiliate advertising program designed to provide a means for sites to earn advertising fees by advertising and linking to amazon.com.